At first, the Blue Prairie forms technology stack can seem a bit overwhelming.  Once you understand the basic concept, it is less important for the casual administrator to need have a deep understanding of the entire stack.  However, it is useful to have at least a high-level understanding of how Blue Prairie Forms works so that you can understand how to administer it more efficiently.

The technologies involved in Blue Prairie Forms include:

The MultiValue server can run on any supported UNIX platform (AIX, Linux, HP/UX).

The MultiValue server and the print server (running OpenOffice) should reside on the same network and be visible to each other.

“Print Server” is a generic name that we use to refer to the machine (or virtual machine) where the OpenOffice suite is installed and configured.  This server is used to read and convert the Blue Prairie print source document into a printed output.  This server must be installed with Linux (preferably Fedora 14 or later) and OpenOffice (preferably 4.1 or later)

CUPS is the standard print subsystem used in most Linux distributions.  CUPS handles printing requests submitted by the application (in our case OpenOffice) and provides a structure for the use of print drivers.  CUPS also provides a nice web-based print management page that can be accessed from a browser.  It can be used to manage and monitor print jobs generated by Blue Prairie Forms.

What must be running

For Blue Prairie Forms to work, the following must be running: 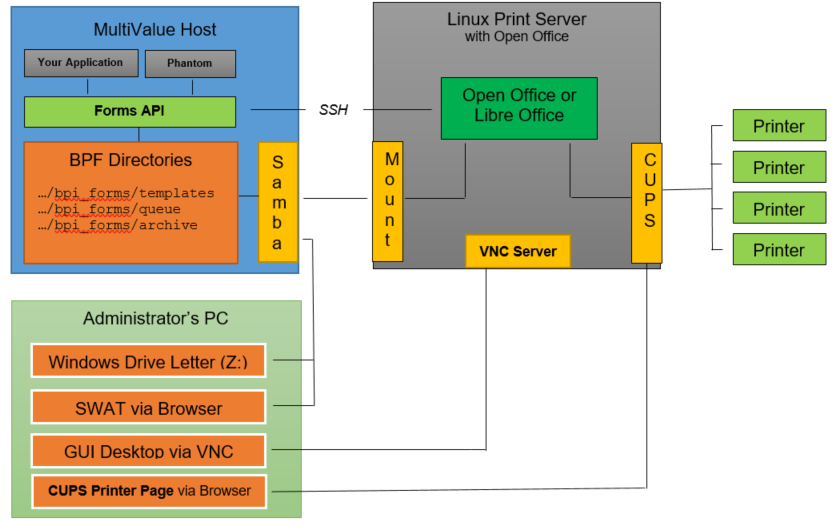